3D digital printing is beginning to replace the traditional form of construction in homes. Improving in quality and eficiency.

The use of 3D machines in the construction sector is expanding considerably.

We have seen how in recent years 3D printers have been able to build almost everything. Fabrics, bones, weapons, food …

The reality is that it is beginning to spread its use in the construction of houses.

There are many benefits that 3D printers bring to the construction sector: low costs, faster construction, ever higher quality, more personalization capacity in homes.

We currently find different projects that are being carried out in 3D printing construction.

Various types of housing models are being made. Social housing of low cost, housing destined to be used in case of humanitarian disasters, blocks of buildings, skyscrapers …

Hans Vermeulen, (DUS Architects) is currently involved in a project to print a traditional house typical of the region of Amsterdam (Netherlands).

Hans Vermeulen comments on 3D printing “If you gain in materials, you also gain in sustainability and also save money”.

“In the end, it’s about building better cities faster and cheaper,” says Vermeulen.

The responsible for this is possible is the KamerMaker printer of 3.5 meters that manufactures in real time. This 3D printer contains a transport container that is filled with concrete and that in turn allows to assemble the construction better.

Far from what some people think, 3D printers can make durable and reliable housing in a short space of time. Making them very economical too.

We also highlight the Dubai Future Foundation project, which made a functional building with a 250m2 installation using a 3D printer of 6 meters high and 36.5 meters long.

It is also taking much into consideration 3D printers for its rapid construction, ideal in places where there have been major natural disasters and where there is a need to build housing is urgent. 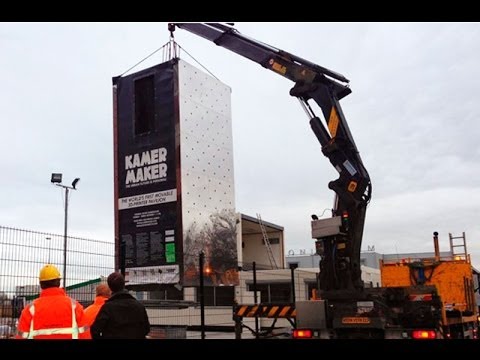 HuaShang Tengda managed to build a 400m2 building in 45 days with the possibility of sustaining earthquakes of magnitude 8.0.

There are 3D printers that can reduce production costs by up to 80% and manufacturing times by 60%.

The viability of making autonomous 3D printers to send them to other planets in the future is being studied.

Engineers from MIT are part of a project that consists in building buildings on other planets.

To an initial model they did they have extended tools such as waste collection, ice …

In addition to being able to supply power printers through solar panel panels.

The homes that in principle could be made would be species of domes. But everything changes and in the near future the advances could be very significant. These autonomous printers that would be sent to other planets would have terrestrial radars and temperature and light sensors that would allow them to find the most suitable sites to carry out the constructions.

The MIT printer has two arms. A hydraulic arm and an electric arm.

Currently many people equate the discovery of 3D printers with inventions as revolutionary as in their day were steam engines, the production of electric power.

“For me it is more than a printer, it is a new way of thinking that facilitates a paradigm shift in the field of digital manufacturing and architectural design,” MIT Engineer Steven Keating.

“The ultimate goal is for us to have a totally autonomous team, which can be sent and used in a hostile environment such as Antarctica on Earth, or under the inclemencies of space on the Moon or Mars,” Steven Keating.

“3D printing is going to transform the way we understand architecture,” says Keating.

“We can design something, at the end of the day send it to a machine and, in the morning, have a three-dimensional impression of that design.” Norman Foster, British architect, defender of the vanguards.

Norman Foster “imagine a future in which not only houses, but entire streets will be printed in one piece. That’s the potential of this technology … if it works. ”

There is still a long way to go in 3D printing, but the reality is that there are very ambitious projects.

Keyence / WI-5000 series, 3D measurement that use the principles…