HomeRoboticABB Robotic / Yumi, robot that can be controlled with “Eye-tracking”
RoboticVideos Robots

ABB Robotic / Yumi, robot that can be controlled with “Eye-tracking”

Yumi, a robot conceived by ABB, is achieving high-precision movements by means of indications of the human gaze. “Eye-Tracking”.
Yumi is a double arm robot very similar in appearance to a person weighing 38 kilos.

Yumi was officially presented by ABB at the Hanover Fair on April 13, 2015.

We highlight ABB as a leading multinational company in industrial digitalization technology.

With a heritage of more than 130 years ABB operates in more than 100 countries and employs around 132,000 people.

It is a leading company that currently performs more than 70,000 connection control systems in 70 million digital industrial devices and equipment.

The Yumi robot has been developed to work hand in hand with a human companion.

You can learn through physical processes and experience. No need to instruct him by inserting complex codes in him.

He can learn while practicing with him. This way you do not have to waste so much time in going teaching him.

We emphasize the learning speed of the Yumi robot.

Yumi is learning and improving in technique with the passage of time also due to updates that are made in him through his Internet connection.

It uses data analysis that makes you gain in performance and reliability in its processes and in the useful life of its hardware.

Yumi possesses a great precision that makes him become capable of being able to thread up a needle.

This precision gives you the ability to reduce less waste in your work processes, thus gaining efficiency.

With Yumi we gain in security since it presents some intelligent protection mechanisms.

For example, Yumi is designed not to be able to perform clamping with his articulated arms on human beings.

It has been implanted a small soft padding that is sensitive to contact that reduces the speed of the collision.

Yumi intends to change the way we think about automation.

What ABB intends is to get the Yumi robot working together.

Thanks to the security it offers, no need for cages or protection from it.

Yumi is designed to work hand in hand with the human being.

It is designed to work with us, to interact with us in endless possibilities.

Yumi is a collaborative robot capable of handling anything.

On the ABB website, we can see how Yumi is capable of handling small objects such as a clock from objects that are larger than a Tablet PC.

Thanks to its two articulated arms, Yumi has many advantages and functions that a simple one-arm robot can not perform.

In conclusion.
Yumi is a robot that is capable of performing required movements to assemble small parts within a limited space while maintaining human reach and minimizing space in the factory.

YuMi can be installed in jobs that are currently being used only by humans. 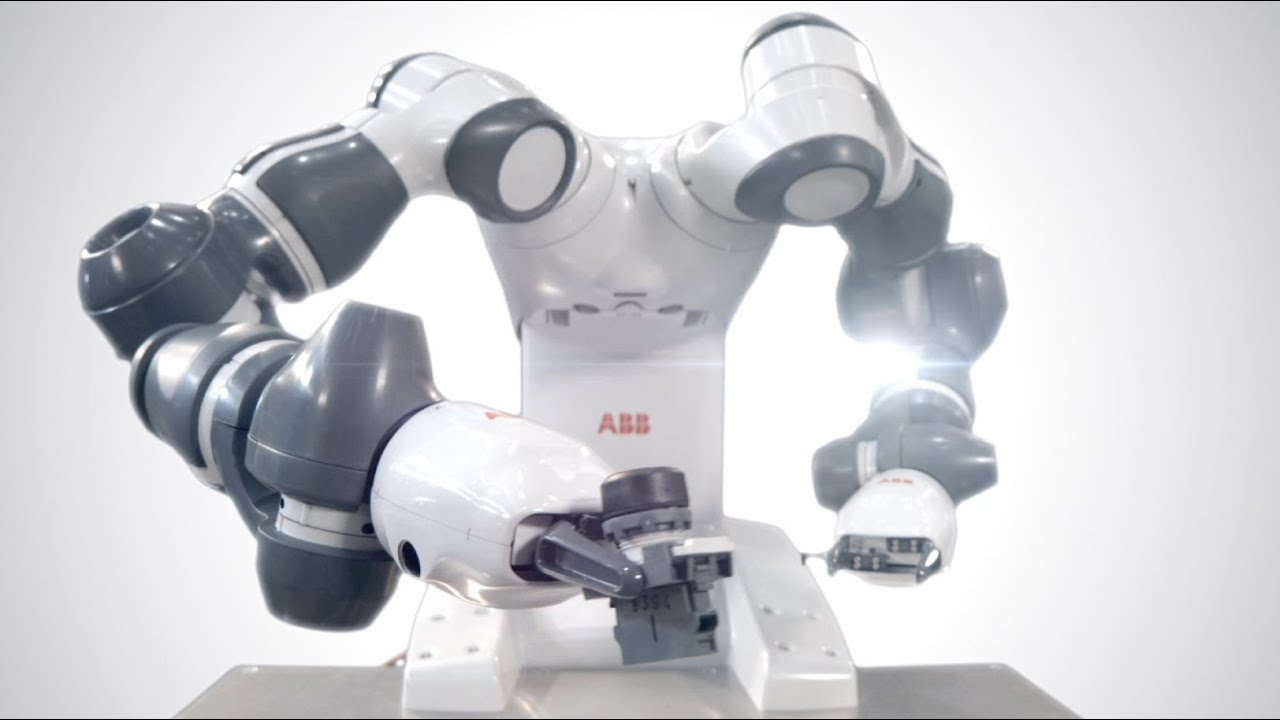 The company ABB and Irisbond together with the Bind 4.0 program of the Basque Government have achieved the great advance of eye-tracking.

This event has been made public at an event in the Technology Park of Guipúzcoa. Where a person with multiple sclerosis disabled helping with his eyes and the robot “Yumi” (who has been in charge of moving the chips) have been able to play chess without any problem against an opponent.

The software that allows the control of the Yumi robot is based on the “webtracker” technology.

This technology provides information to a computer through a webcam that detects the indications given by the movements of the eyes.

The “webtracker” opens an immense field of action and allows many possibilities to people with certain degrees of disability.

“Outside of industrial robotics, we saw that the message was very direct: using technology to move robots with your eyes opens a range of solutions that were previously unthinkable.” Miguel Ángel Trujillo, representative of ABB in Spain.